Kowloon Walled City in the foreground, Hong Kong behind.

Kowloon Walled City was a densely populated, ungoverned squatter’s colony in Kowloon City, Hong Kong. It was called the “Walled City” because it was built on the remains of an old Chinese fort. The Walled City contained 33,000 residents within its 6.4-acres. That’s about 3.2 million people per square mile. By contrast, Manhattan is about 170,000 persons per square mile. There was little light, little air, but the people lived their lives, worked, operated factories, delivered mail, threw their garbage out the windows, if they were lucky enough to have windows. Construction was always upward, with little regard or engineering or permitting. In spite of that, the structure stood, with whatever consequences for the residents. The city was demolished in 1994, after a mass eviction. 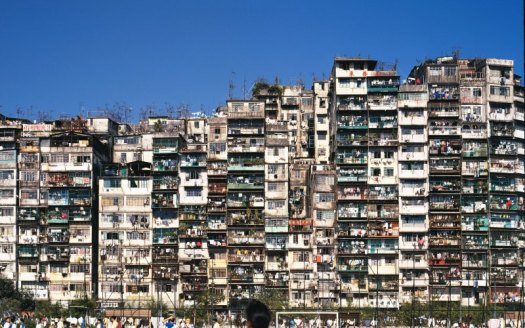