The California bungalow, an intermediate stage between the……

All 33 windows of this classic 1922 California bungalow were restored, rather than replaced. Home Window Repairs, of Ventura, did the work and said that the owner felt that these windows were such a defining element of the home that it was necessary to restore them, rather than to replace them. The work included installation of weatherstripping, restoring the existing old growth Douglas fir, and stabilizing the frames and sash. The California bungalow was a period style in the transition from the Victorian to the California Ranch – – or from the vertical to the horizontal. This transition was expressive of an evolving relationship with the outdoors into something to be looked at, through a “picture window”, rather than experienced therapeutically, through an open window. Window proportions told the story, the ratio of height to width tracking downward as the 20th century progressed. In a sense, window proportions defined the look, along with evolution of other dimensions, such as descending ceiling heights, and reduced roof pitch. 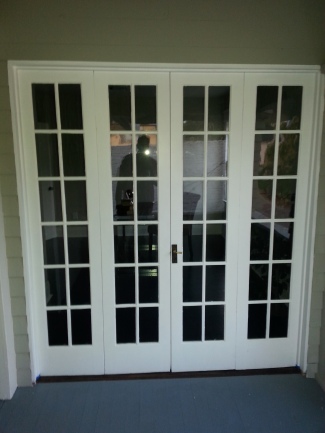