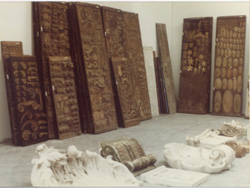 It happens sometimes that the tools used by the artisans are almost as historic as the buildings that they are working on. Such a case is the legendary plaster moulding archive known as the  “Epstein Collection”, a library of original molds going back to the 1850’s. This collection contains the classical forms such as egg and dart, acanthus leaf, greek key etc. as well as mouldings in the Adam style, Greek and Colonial Revival style and Art Deco. Put together over many years, this collection was accumulated over time by a long established ornamental moulding company based in Boston. When the company went out of business (in 1982), it was considered to be of such historical significance that the Smithsonian Museum expressed an interest in acquiring it entirely. Ultimately, however, it was agreed that these plaster mouldings would benefit the built environment most in circulation as a working archive, which is where they remain. (Images courtesy of Michael Amrine.)