Not completely original, but ready for winter driving season.

History is a moving target, and it is not always easy to determine which moment in an historic structure or artifact’s life to restore it to. Fellow founding father George Washington’s axe, they say, has since had two new heads and five new handles. Which head? Which handle? So it was with John Hancock’s 1778 carriage. This vehicle had been through many changes over time and was finally mounted on sleigh runners in the late 19th Century. Walter Eayrs, owner of Blackburn Building Conservation LLC in Middleboro, Massachusetts, notes that there was an accumulation of non-original finish, damaging the original finish underneath. A decision was made to remove the over-paint and conserve the original 1778 appearance.  Reversible varnish was then applied to protect the exterior panels.  The deteriorated interior fabric and appointments were conserved as befitted irreplaceable materials used by a founding father. Walter Eayrs notes that Hancock’s personal favorite color was yellow, and he favored suits of clothing in that bright and assertive color. This preference was borne out by the finishes that they uncovered in the work. The carriage is still mounted on the non-original sled runners. An article on the work has been published in the upcoming World on Wheels magazine.

Walter Eayrs is a Member of the Guild of Building Artisans. 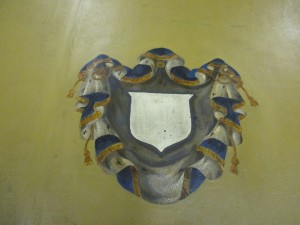 John Hancock’s coat of arms on the door panel of the carriage – – yellow is the color.

The interior of John Hancock’s carriage – – pretty much original, as far as we can tell.

1893 photo of earlier (date?) drawing of Gov. Hancock’s house with a coach and six in front. Not our carriage, we can see, but if you look close, you can maybe see the coat of arms.